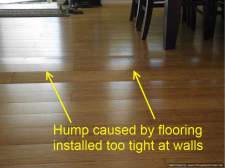 Bad laminate installation is caused from this floor being installed too close to the walls, which caused the floor to hump up across the middle. Click on photos to enlarge. The kitchen cabinets were also installed on top of the flooring. They used brackets to secure the cabinets to this floating floor. They thought that using short screws to attach the brackets to the floor would be ok. The problem was the cabinets were attached to the counter top, which was attached to the wall. This is the same as screwing long screws through the floating floor, which is a big no no.

One Way to Repair Laminate Floors 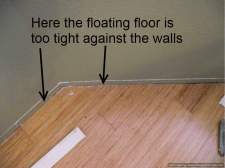 The first thing I had to do is remove the base board on each side of the room to confirm that the laminate floors are up against the walls. Sure enough they are tight up against the drywall on both sides.

Next I have to take this last row of flooring up. This is where you need to be careful not to damage the planks when removing, unless you have extra flooring left over from the original installation.

When the flooring is pushing tight against the wall it can be difficult getting it up. 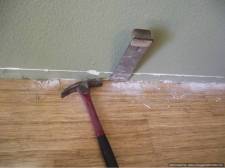 I used my utility knife to cut the dry wall away. This allows me to get something behind it and lift the plank up enough so I can disconnect it. I used my pull bar to get under the edge. Then I hammered the side of the pull bar sideways. As I worked down the edge of the plank I rocked the pull bar sideways to loosen the plank. The drywall that gets damaged at the bottom will be covered by the base board. 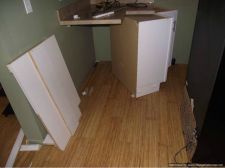 I had to remove the corner cabinet so I could unscrew it from the flooring. They had it attached with brackets. Unfortunately I could not remove the cabinets on the other side of the kitchen unless I disconnected the sink and dishwasher. This could be done, but I'm not a plumber or a cabinet guy. It would be expensive for the homeowner to pay them to do that.

There is another way to remove the flooring from underneath the cabinets. It would require a specialty saw which is designed to cut up against the cabinets.

Hopefully what I was able to do will fix the problem. This is just one problem that can happen from bad laminate installation. Its better to just pay someone who really knows what they are doing in the first place.

The cheapest price is not always the best way to go.

This particular flooring is Home Legend, Bamboo. Home Depot sells this flooring. Its not actually laminate. It is a floating floor with a thin layer of bamboo on the surface.

Someone That Has no Idea What He is Doing 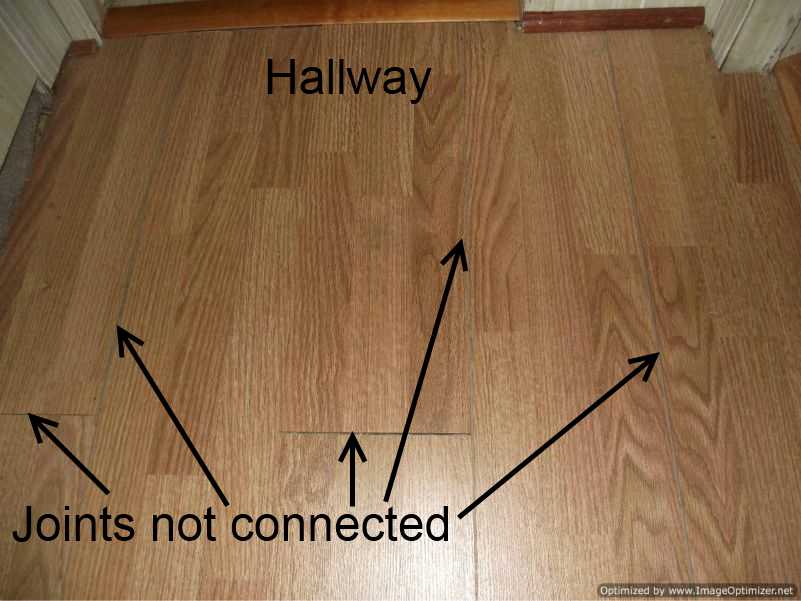 This is an example of a bad laminate installation. The person that installed this floor had no idea what he was doing. He attempted to install Suncrest laminate in a bedroom and hall, about half of the joints were not even connected. The door jambs weren't cut, the quarter round wasn't cut in the corners. The hallway was lower than the bedroom. I had to install a sub floor in there to make the hall the same height. He installed some kind of molding that was at an angle. I don't even think this molding was for flooring.

I write about these kind of jobs, mainly to let my readers know what can happen when hiring the wrong person that could cause you to have a bad laminate installation.

I had to take up the floor and salvage any planks I could. If the floor didn't stay where he wanted it, he just put a nail in it. Along the closet he put drywall screws on the end of every board. That's a big no no for a floating floor. The quarter round wasn't even close to matching the floor. And the kicker is , He got paid for this. 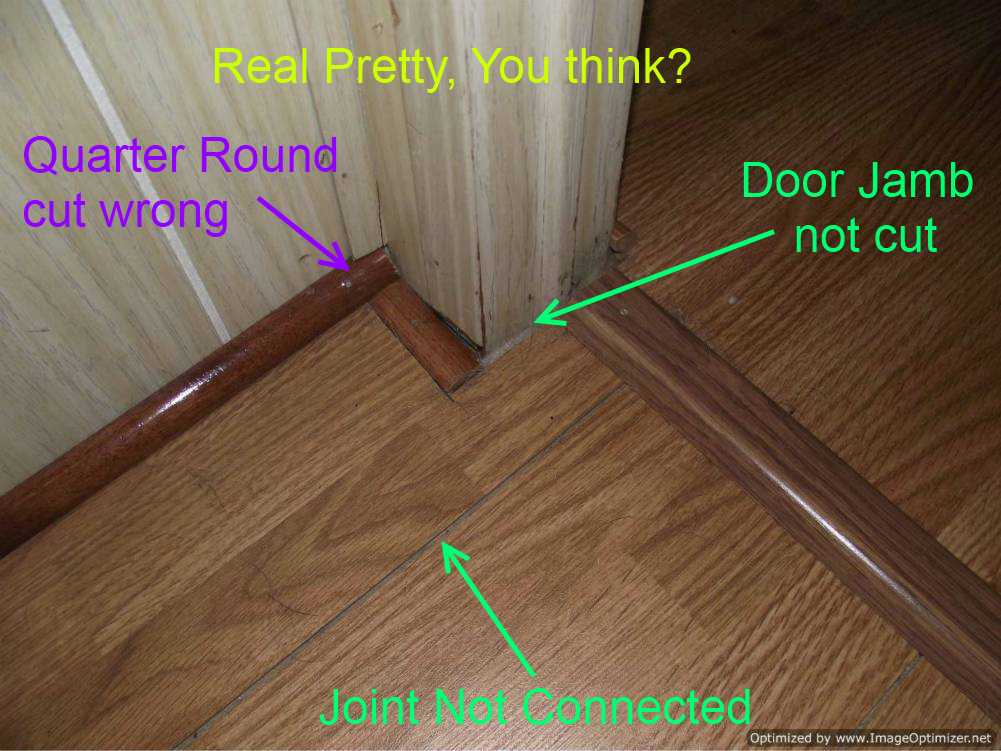 I managed to save about half of the flooring. Then we found out this laminate was discontinued. A dealer said he had 8 boxes left before I started the job. When we went to order it he said he couldn't find them and don't believe anything until you have it in your hands. Great, now what do we do. Luckily the store I was working for found someone about 40 miles away that ordered the same laminate. I think the full pallet fell off the truck. So John the guy I'm working for drove there and was waiting for that store to open in the morning. He had to sift through about 30 boxes to find undamaged planks.

Well anyway I got the job done and it looked nice. They wanted the same laminate in their living room but we didn't have enough. So they picked out something similar. And I did that also.

I was called to fix the problem because the laminate was peaking up high enough to trip over. When I walked in my first thought was, it is hitting on the walls somewhere. 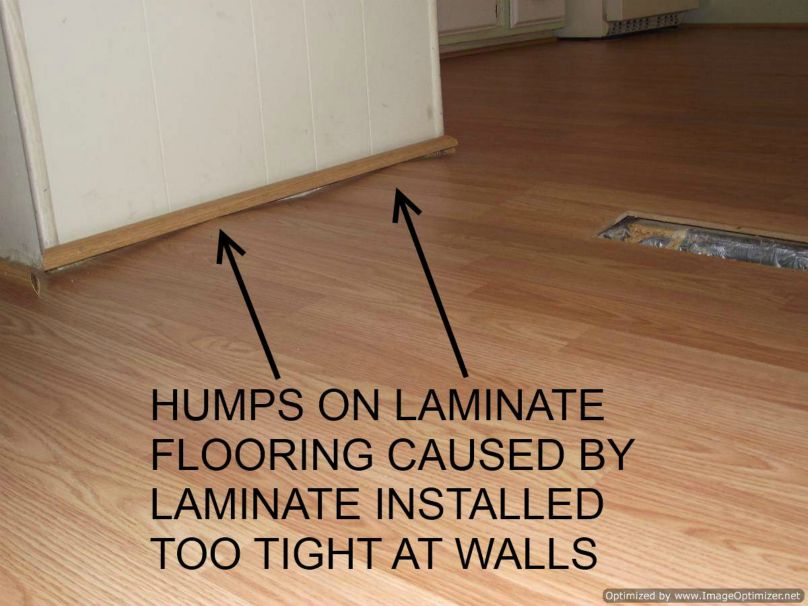 This particular bad laminate installation was done by a local handyman that said He installed ten laminate jobs. So apparently he knew what he was doing. After installing ten jobs as a helper I still wouldn't have attempted an install on my own.

I have seen where guys can really sell themselves as far as pretending to know what they are talking about. And most folks don't know any better. They just think it sounds good so they hire them. This laminate wasn't that great of a product either. (Project Source 7mm From Lowes)

The main mistakes this guy made had to do with expansion. He didn't cut any door jambs and installed the laminate too close to the walls and transition tracks. He also screwed through the laminate with wood screws. This caused the floor to buckle up.

The first thing I had to do was identify all the promlem areas. I found five different areas that had to be addressed. The layout was a living room, dining room and kitchen.

This was a single wide mobile home. The length of the laminate was around 30 feet or so from one end to the other. The hallway was just a little 3X3 area with three doorways. Since the door jambs weren't cut I had to take the hall up to cut the jambs.