As of 2014 Sams Club still sells this same product, although the cost has gone up. I see it on their website at 1.85 per foot now. I also noticed that it is their second highest selling laminate in this color they sell, out of the 40 they have.

They also show some 12mm laminate with attached pad at 2.29 per foot, which isn't bad. This is their #1 selling laminate. 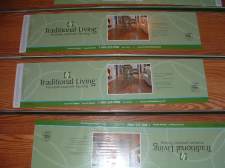 It is 8mm thick with a 2mm attached pad. The pad itself can cost anywhere from .25 to .60 per square foot. He did have to purchase a moisture barrier because of installing the laminate on a concrete slab. It cost about .25 per square foot.

It comes with a lifetime warranty.

The edges are square.

This particular color is Golden Amber Oak. The planks are the three strip pattern. 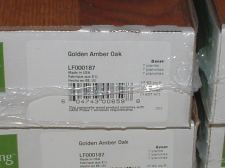 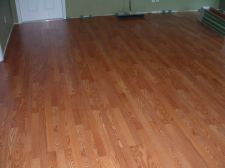 This laminate was easy to install because of the locking system, (Lock-n-Seal) which enables the planks to be tapped together while laying flat on the floor. Some locking systems require you to connect the planks while tilting each board up at an angle. This can make it difficult when installing up to door jambs.

The only downside to Sams Club, Traditional Living laminate flooring was the end joints were not always flush. One side would be a little higher than the other side. I could not find any apparent reason for this, it didn't matter if I connected the long side first or the short side. It didn't happen every time I installed a plank. I could use my tapping block set right on the edge of the high side and give it a tap with my hammer, most of the time it would do the trick and make the end joints flush. I put a photo here showing how I do this. You can't see the joint, it is just on the edge of the tapping block but not covered. (click on the photo to enlarge) 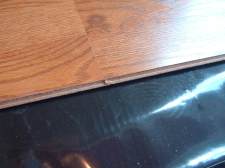 One other thing I had to keep an eye on was the small pieces of core material that would show up along the edges. Putting the planks together without removing these can create problems along the joints. (click on photo to enlarge)

Anthony Garrison Phone number 813-713-1535 Copyright 2009-2016 Laminate-Flooring-Installed.com I have had quite a few of my readers tell me they would like to donate something to me for the information that helped them. I am not a charity, but I put a lot of time into bringing this information to the internet. If you feel compelled to contribute for my efforts it would be most appreciated. Privacy Policy Disclaimer